A large majority of the study—9257 questionnaires—details owners’ experiences buying directly from the resort. An alarming 98% said they endured unfair and/or deceptive sales practices, examples of which include the salesperson refusing to take no as an answer, misrepresenting the investment value of the timeshare, and misrepresenting the ease of reselling and/or renting the property.

“For years, timeshare sales representatives have been duping Americans into signing expensive contracts that have little or no value and no end date,” said Gordon Newton, President of Newton Group and a Non-Attorney Partner at DC Capital Law. “We are helping timeshare owners fight back.”

The study uncovers over 100,000 instances of unfair or deceptive trade practices as defined by the courts and outlawed by the Federal Trade Commission Act and individual state laws. Newton Group is freeing owners from unwanted timeshare contracts while its partner law firm, DC Capital Law, determines if the clients qualify for any legal claims.

“This study is an invaluable tool in exploring potential claims against timeshare developers and related entities in the industry,” said Randolph Smith, Senior Counsel at DC Capital Law. “It provides us with a framework for analyzing the scope of the problem.”

According to the study, an average of 11 instances of deception and/or unethical, oppressive or unscrupulous acts by timeshare sales representatives was reported per questionnaire.

“These consumers experienced a bombardment of high pressure sales tactics and misrepresentations, and even the most skeptical ended up signing on the dotted line under the onslaught,” Newton said. “I hear from a lot of timeshare owners who say they are ashamed. Well, this study shows exactly who owns the shame.”

“Never before has justice been so accessible and affordable for timeshare owners,” Newton said. “Our comprehensive approach to helping timeshare owners is the gold standard of the timeshare exit industry.”

The business model allows for each Newton Group client to have their own separate and independent legal engagement with DC Capital Law, whereby the attorneys work directly for the timeshare owner and have a fiduciary and ethical duty to act in owners’ best interests.

“DC Capital Law is dedicated to exploring the pursuit of legal claims based on our clients’ experiences,” Smith said. 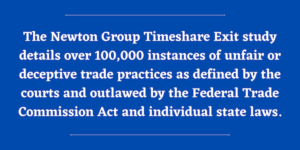 About Newton Group
Newton Group, a leader in the timeshare exit industry for over 15 years, is dedicated to helping consumers exit their unwanted timeshares through their unique dual process that combines expert timeshare exit services with the protection of personal legal representation. Newton Group is A+ rated at the Better Business Bureau (BBB), was a finalist for the BBB Torch Award for Ethics, is author of “The Consumer’s Guide to Timeshare Exit” and has five-star ratings at Google, Trustpilot and the BBB.